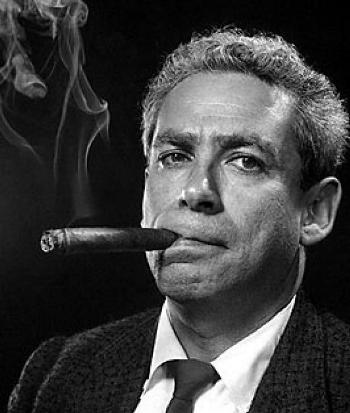 By 1949, Mynx Devlin was RKO’s biggest star. In her memoir and podcast The Atomic Bombshell, Mynx reveals the story of a failed seduction by Howard Hughes. Hughes was enraged at being spurned. He tried to wreck Mynx’s movie career by loaning her to a poverty row studio, Allied Artists. Director Samuel Fuller wanted her for his new film Hell is a Female. This was the follow-up to his first feature, I Shot Jesse James. Here’s how Mynx describes him in her memoir: “Sam’s a well-known maniac/loose cannon/crank, who makes these energetic, slang-riddled, highly eccentric action movies for a buck fifty.” Fuller tells her, “(You’re) a wised-up dame with a Ph.D. from the school of hard knocks, a delicious combination of guts, gams, and gumption. I need a gal that’ll scare the shit out of the guys who kicked Hitler’s ass, and you’re it!’”

“Film Is A Battleground”

Fuller famously said, “Film is a battleground: love, hate, violence, action, death. In a word: EMOTION!” Mynx trusts Fuller, especially for the famous last scene. Here Mynx, sobbing, pours hot lead into bad guy Broderick Crawford. Fuller knew that two-year-old Mynx was in the room when her own mother was murdered. He used that knowledge to stoke her emotions. This is the scene that shows up in every compilation of great film noir scenes. It has earned the praise of Martin Scorsese. Quentin Tarantino called it “my favorite hate-crazy femme-tastic rub-out.” ” Howard Hughes was mortified when a film that cost $278,000 grossed $1,588,691 for another studio.

“A Bullet For Peggy”

Sam Fuller immediately dashed off another film for Mynx, called A Bullet for Peggy. This was a second straight shot of grisly noir melodrama. Mynx would play “Trixie Blake,” a brainy chorus girl who bumps off her mobster boyfriend (Roy Roberts). She then takes over his Gotham crime rackets by recruiting the Army sharpshooters she’d met while dancing in a WW2 USO troupe in Germany. And the cop who vows to bring her down? Griff “The Badge” Sanders (Lawrence Tierney)…who just happens to be Trixie’s illegitimate father. Mynx begged Hughes to lend her to Fuller a second times. No dice, said Hughes. He couldn’t let his biggest RKO star go to waste. Instead of A Bullet for Peggy, Mynx made Devil Girl of Cannibal Island, a film she (rightly) called “not quite the greatest movie of all time. “

Mynx always named Francois Truffaut as her favorite director. But her second favorite was Sam Fuller. They remained friends the rest of their lives, and Mynx always hoped they’d work together again.