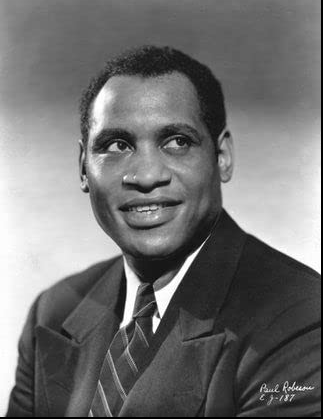 Right before Mynx Devlin broke through to top 10 box office success, she made an infamous curio. This film bombed twice: once as a progressive fable, then again as anti-Communist propaganda. In 1945, the progressive left was having its moment. The war was over. Russia was our ally. Mynx’s lover, ace screenwriter Dixon Cook Jr. joined just about every other left-leaning actor, director and producer to form “Collective Pictures: A Democratic Enterprise Dedicated to Making Quality Pictures that Ennoble the Human Race.” Their first (and only) movie was a Capra-esque (as if) fable called Here Comes Uncle Joe!

Future “Hollywood Ten” member Edward Dmytryk directed the movie. In the film, Uncle Joe Stallings (Paul Robeson) is shunned by the folks of “Anytown” because he wants to turn his barn into a “United Neighbors Building.”. The Mayor of Anytown, Richard X. Ploiter (Lee J. Cobb) gathers a lynch mob to get Uncle Joe. They ready to string him up, but Gloria Peoples (Mynx Devlin) leaps upon the gallows and delivers a spellbinding (?) 18-minute soliloquy that causes the townspeople to save Uncle Joe. They hoist him on their shoulders and sing For He’s A Jolly Good Fellow. The film ends with Mynx’s father, Victor E. Peoples (John Garfield) leading the town in a rousing rendition of The House I Live In. Unfortunately, sincerity wasn’t enough for filmgoers, who stayed away in droves. Collective Pictures dissolved in bankruptcy.

I Married A Pinko!

Uncle Joe was distributed by RKO Pictures. Howard Hughes bought RKO in 1948. Hughes was a rabid anti-communist eager to cash in on Mynx Devlin’s fame. In 1951, he ordered Dmytryk, now a friendly witness for HUAC eager to rehabilitate his career, to re-purpose Uncle Joe as an anti-Communist nightmare. In this new version, John Q. Public (Ronald Reagan) would rather watch television than go to school board meeting where some radical types are going to turn his son’s elementary school into a “United Nations Marxist-Leninist Free Love Peoples’ Revolutionary Re-Education Camp.” He falls asleep and “dreams” 45 minutes of Uncle Joe re-cut to make Robeson the villain. Public wakes up and crashes the school board meeting in time to deliver a “rather be dead than red” speech that defeats the Commies and saves the day.

This version was even less popular than the first one. Both films have rightly been relegated to the dustbin of history.